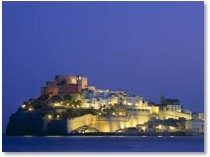 Peñíscola raises on the horizon with its medieval walls surrounding the downhill plunging cobblestone streets, which in 1972 were proclaimed as a “historic and artistic assembly”. The defying silhouette of the castle, a “national historic monument” since 1931, began to be built on top of an antique Muslim fortress in the year 1294 and was finished 12 years later by the Order of the Knights of the Temple. In 1319, after the dissolution of the Order of the Temple, the castle was left in the hands of the Montesa Order, who enlarged the fortress. But above all these things, Peñiscola is the city of the Luna Pope, Benedict XIII, who, driven by his by his ferociously brave character encouraged for long years the Great Western Schism and added new constructions to the castle such as the “Torre del Papa Luna” (“The tower of the Luna Pope”). Up to this day, the legend states that his spirit still wanders around the castle, gazing trough the windows and repeating over and over that phrase which characterized him when he was alive: “I am the true Pope”. 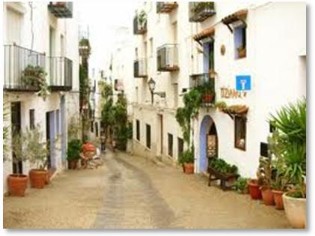 In the city of Peñíscola me must pay special attention to the Parish Temple of Santa Maria de Peñíscola, which still keeps gothic traceries of the 15th century, the hermitage of la Virgen de la Ermitana, were we can see on the façade a typical valencian baroque ashlar, the Parque de Artillería, The Sea Museum, the Bufador ( a great gap between the rocks were the sea “breathes” on stormy days), the Natural Park of the Irta mountain range, a wonderful wildlife reserve were we can go trekking.

Peñiscola has a wide range of beaches and coves. Among the most outstanding we can find the “Playa del Norte” with more than 5 km of fine golden sand, were we can lay back and enjoy the sun, rent rollers or bathe while enjoying the beautiful view of the castle. On the “Playa Sur” we can rent a wave runner or hang out in one of the many coves were all sorts of water sports such as diving, surfing or fishing are practiced on a daily basis. Or, if we prefer, just relax and enjoy the crystalline water.

Peñíscola offers a wide and varied selection of apartments to rent, thanks to which Peñíscola receives a remarkable flow of tourists, who have a preference for rental apartments when it comes to choosing accommodation, since they present more affordable options than the nonetheless fabulous hotel range. It is a more comfortable and reasonably priced way to spend your holidays in this charming and cozy Mediterranean city.

In Peñíscola we can enjoy an excellent gastronomy thanks to the local sea food abundance, the long lasting fishing tradition and it´s assorted orchard. Worth mentioning are the “All I Pebre” (a sea food, garlic and monkfish casserole), the “Suquet” (fish stew), the “Arroz a Banda” (rice with fish and shrimp), the “Paella” , the “fideua” (similar to the sea food paella, but made with pasta instead of rice), and assorted local sea food such as the “dátiles de mar” (piddocks), the “cañadillas” (sea snails), mussels, etc.

Peñíscola, a city full of history, backed in the Sun, knead by the Sea and the Rocks.